For anyone who remembers their awkward teen years, is living through them now, or feels like their insecurities have never left, Dear Evan Hansen will strike a chord.

Playing at the Kennedy Center’s Eisenhower Theatre, the Broadway smash, which garnered 6 Tony© wins and a Grammy award, will have you grabbing your tissues to cry – and laugh. 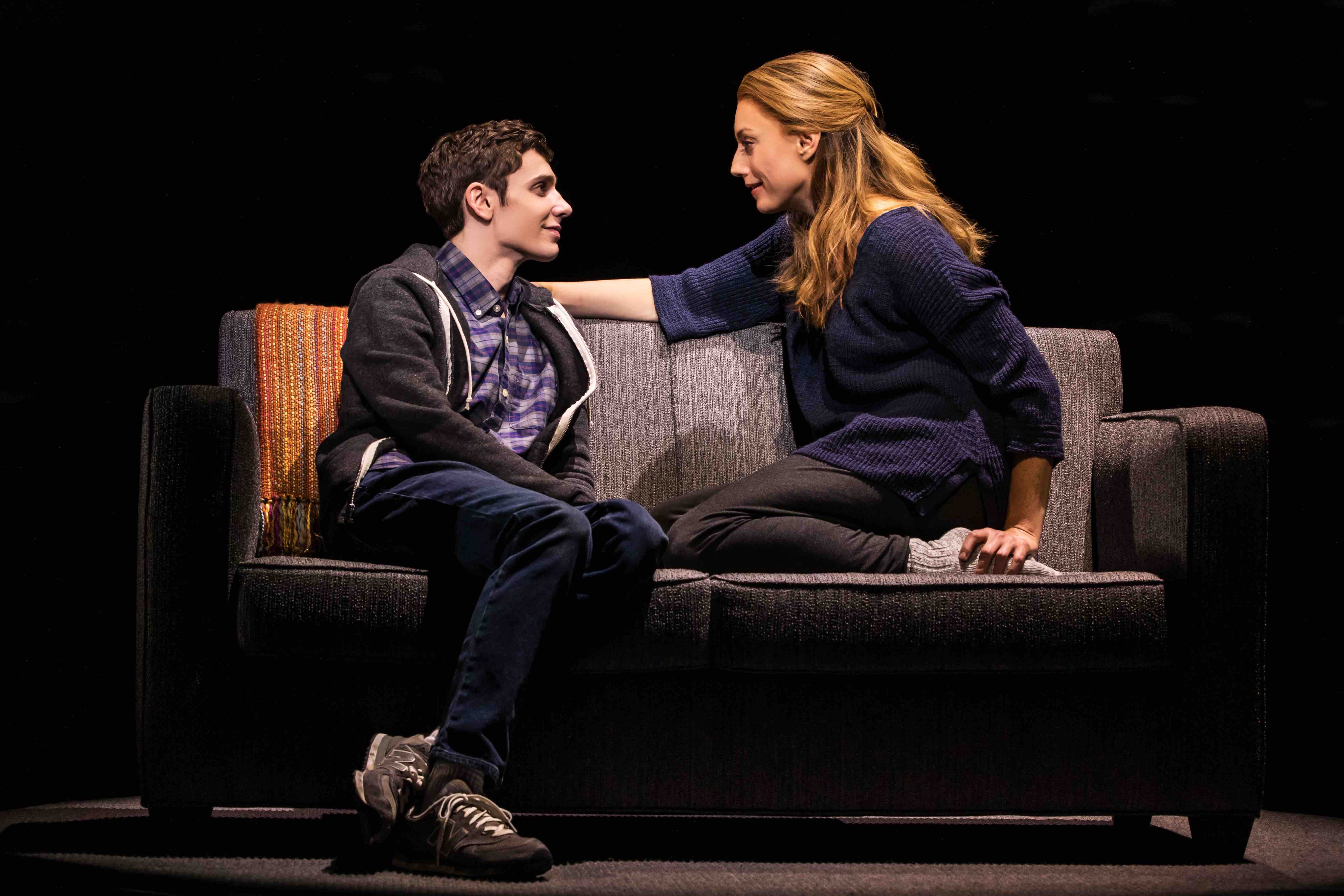 The show centers around a socially anxious and awkward teen who is so lonely and desperate to fit in (or even be seen), that he inadvertently gets swept up in a lie that takes flight on social media after the death of a classmate.  In a crushing twist of fate, Evan Hansen gains the attention and adulation he always wanted —  praise which is precariously sustained by his ability to maintain this facade.  He is just one click away from being discovered.

Ben Levi Ross plays the title character, capturing the awkward persona of Hansen, and in doing so, powerfully conveys the pain that comes from feeling like an outsider.  Plus, he holds his own with the song Waving Through a Window, that signature song that put the show, and Ben Platt, (the original Evan Hansen) on the map.  Audiences were cheering wildly when Ross finished – and it was only the second song into the show.

Jessica Phillips, who plays Hansen’s mother Heidi, underscores the pressures of being a single mom while trying to nurture her troubled son.  The supporting cast, including Maggie McKenna (who plays Hansen’s love interest and sister of the deceased student), alongside Christina Noll and Aaron Lazar (Maggie’s grieving parents), give us a front row seat to a family enveloped by so much despair, they will hold on to anything they can that will offer answers about their dead child. 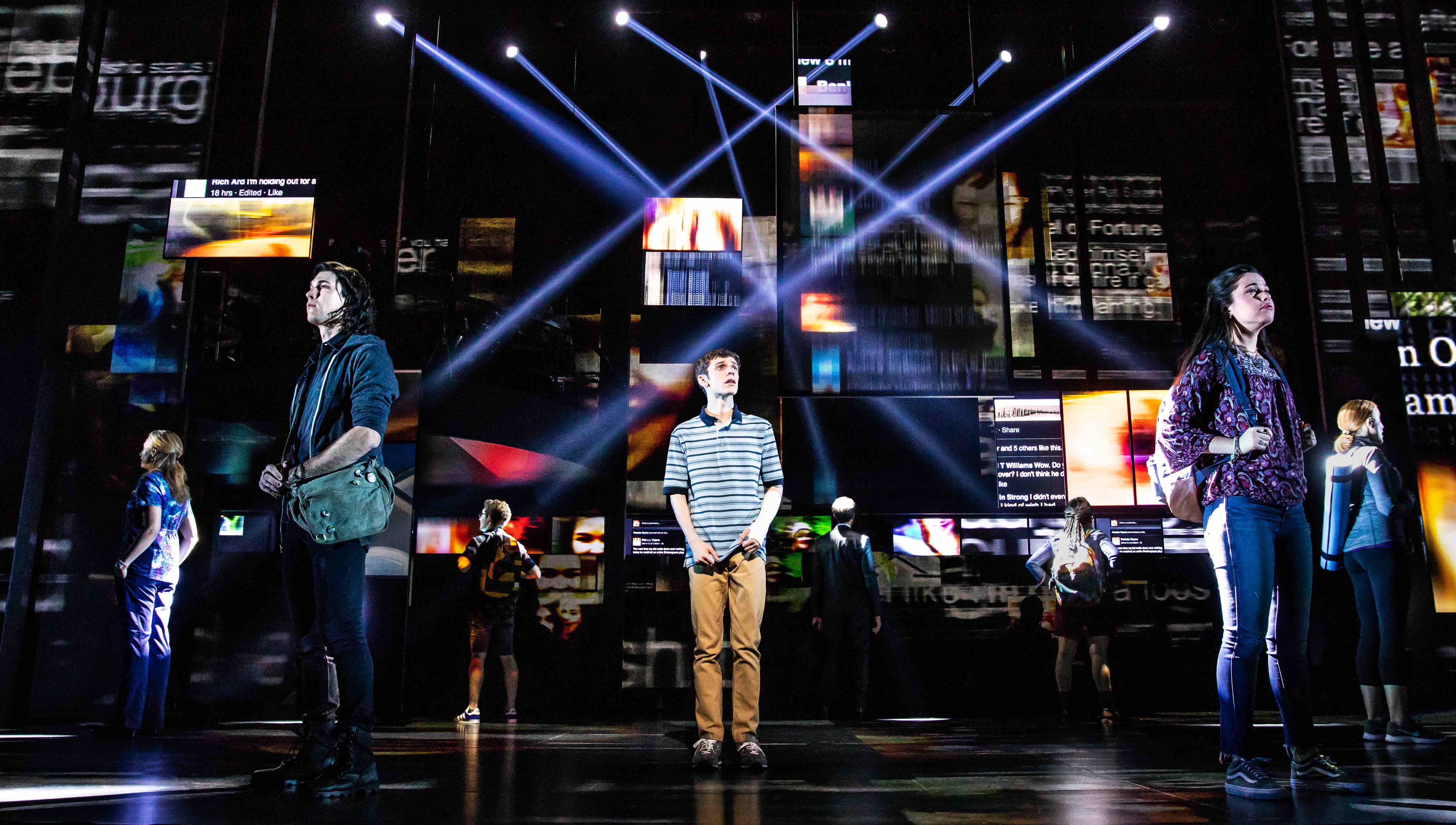 While the show is incredibly heavy, there are moments of levity, often illustrated by awkward moments of adolescent angst, crushes and clumsiness.

As if we aren’t immersed in social media as it is, the set puts it in our face, literally, as the stage is comprised of moving screens with projections of social media threads and video running throughout the show.  The connection between set designer (David Korins who worked on Hamilton) and the projection designer (Peter Nigrini) was flawless.  All of this was under the helm of brilliant director Michael Greif, who has been with the show since its developmental stages.

Benj Pasek and Justin Paul, are the composers and lyrists behind the stunning music (they are Tony, Oscar, Grammy and Golden Globe winners).

From the music, to the set, to the actors, Dear Evan Hansen submerges you in a world that may give you reason to put your smartphones down (at least for a moment), and reminds us all that we should never allow the virtual world to overpower our physical one.

While Joe Biden is being sworn in at the 59th Presidential Inauguration, The White House will be a madhouse, as President and Mrs’ Trump’s belongings are being moved out of 1600 Pennsylvania Ave, to make room for the new First Family. Amazingly this is all done without professional movers.

President Trump invited his followers to join him for a rally in Washington D.C. Jimmy Alexander was there, and spoke to The President’s most loyal fanbase, as they marched to the Capitol, and to one of those who stormed the Senate Chamber.